History of the Centre for Sustainable Food Systems at UBC Farm


The UBC Farm is located on the Point Grey campus of the University of British Columbia (UBC), on the unceded ancestral territory of the hən̓q̓əmin̓əm̓-speaking xʷməθkʷəy̓əm (Musqueam) people. Farmland has been a part of UBC’s Vancouver campus since the establishment of the university site on Point Grey, however, the farm’s size, location, purpose, and operations have all seen many changes since the first clearing for agriculture began in 1915.

A vision for a new integrated farm system on campus was first proposed in 2000. After a decade of uncertainty regarding its long-term future, the UBC Farm embarked upon a new academic plan in 2010 called Cultivating Place, with commitments from the university to retain the integrated farm system as a land-based academic facility. As a result of this plan, the Centre for Sustainable Food Systems was created, encompassing the UBC Farm, to encourage research with a global reach. In recognition of the vital role that the Farm plays in fulfilling UBC’s aspirations to be a global leader in sustainability, the site is now designated as “Green Academic.”

A more detailed history of agricultural lands at UBC is included in Fields of Learning: The Student Farm Movement in North America. Former UBC Farm staff members Mark Bomford and Andrea Morgan contributed “The Improbable Farm in the World City,” a chapter about the evolution of the UBC Farm.

Listen to our Story

On our 20th anniversary in 2021, we released a two-episode podcast Growing a Farm: The 20-year Journey of the UBC Farm, that tells the story of the people who started the UBC Farm and – ultimately – saved and protected it development. Listen to the voices of the people who were there and who saw the potential of this space from the very beginning.

UBC’s Point Grey Campus is located on the traditional, ancestral, unceded territory of the Musqueam people. The land it is situated on has always been a place of learning for the Musqueam people, who prior had received teachings in their culture, history, and traditions from one generation to the next. Musqueam people inhabited the area prior to written historical record, and for several thousand years until the time of contact, the forests and beaches of the area were managed by these communities to provide sustenance.

Find out more about pre-university history.

Find out more about Musqueam and UBC. 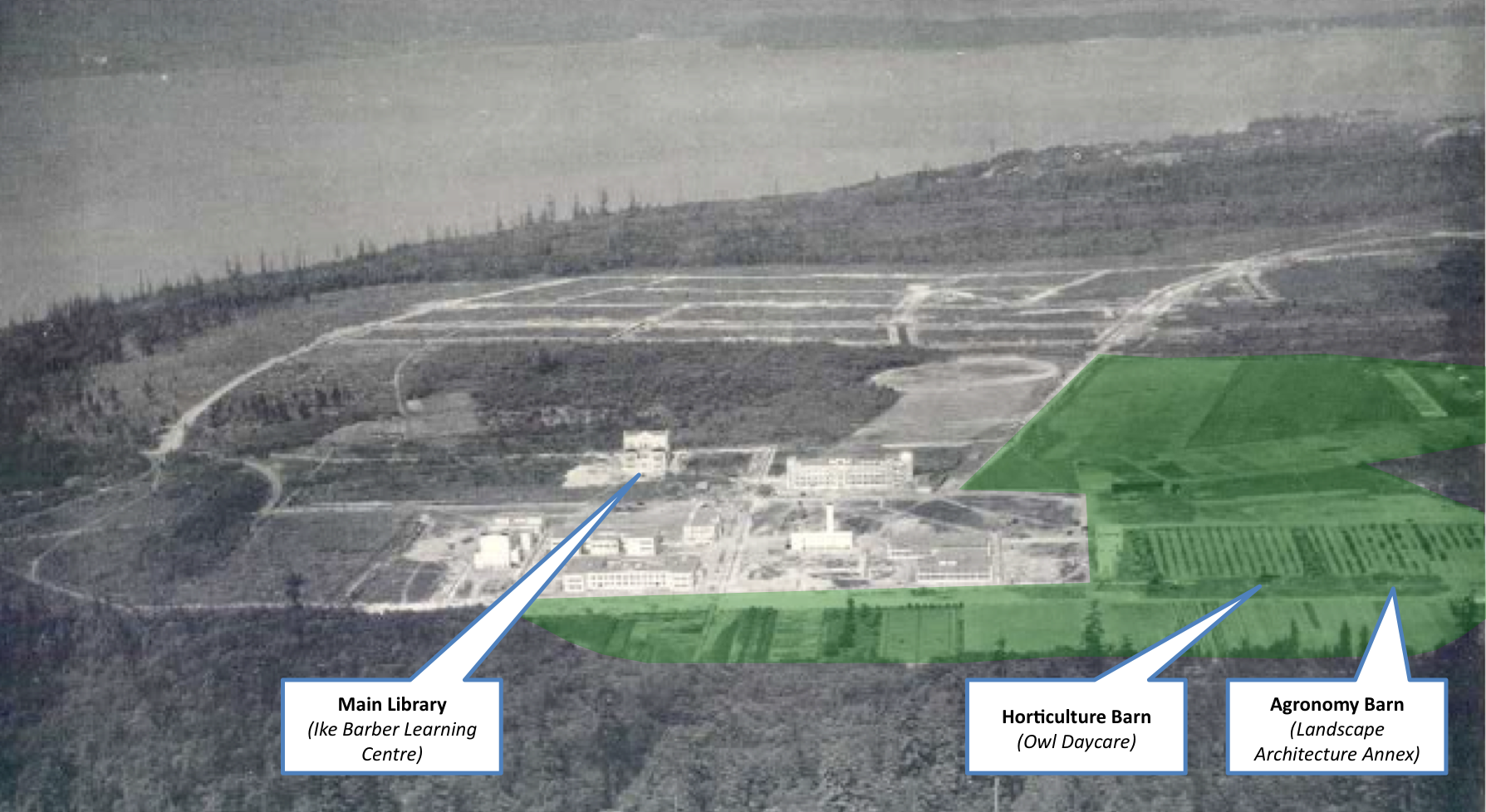 1925 aerial photo of the UBC looking eastward towards Stanley Park. Extent of farm and field areas are tinted in green. Annotations show selected buildings still standing with their 2010 uses noted. 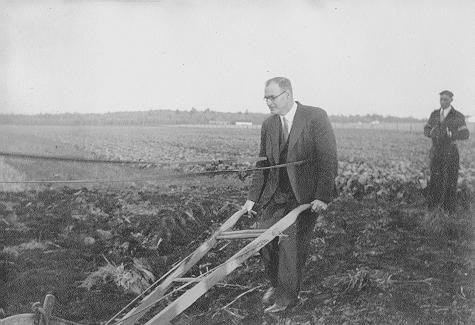 F.M. Clement, Dean of the Faculty of Agriculture from 1919-1949, takes the reins during a student plowing match.

When reviewing potential sites for a new provincial university in 1911, the ability to support a teaching and research farm as a foundational component of campus was considered essential. In the original campus plan, approximately 200 acres (the majority of the campus area at the time) were designated as farmland for agronomy, horticulture, and animal husbandry. The areas for the botanical gardens, horticulture, and agronomy occupied the western part of the campus, between NW Marine Drive and West Mall, extending from the current Nitobe Gardens to the north to the current Totem Field research area and Thunderbird Stadium to the south. Animal husbandry, dairy, and poultry areas included most of the cleared campus land south of Agronomy road. Working in second-growth forest that had been logged in the 1880s, most of the clearing and preparation for the farmlands was done by horse and hand.

Read about John and Mary Young, who built UBC’s first teaching and research farm, starting with a herd of 25 Ayrshire cattle (via TREK Magazine)

Academic activities coordinated through the Faculty of Agriculture made significant contributions to the development of food and agriculture in the province. Both four-year B.Sc. degrees and two-year practical diplomas were offered, both of which used the farm facilities extensively. In addition to the agronomy lands and the dairy farm, post-harvest processing facilities including a poultry plant and a creamery (cheese factory) provided facilities for food science courses offered as early as the 1930s.

The history of the early University Farm is reflected in the design of the new “Old Barn” community centre, which includes an historical photo exhibit in its John Young room. Two remnants of the early farm are also seen in the Owl Daycare facility, initially built as the horticulture barn in 1917, and the Landscape Architecture Annex, built as the agronomy barn in 1925. These buildings used to be in a central location on the University farm.

In the decades following the second world war, patterns of growth in the academy, industry, and cities affected agricultural land both on campus and through the province. At a provincial level, the industrialization of farming shifted food production to increasingly large, mechanized and specialized farms further away from urban centres. The proportion of the population engaged directly in agriculture shrank while suburbs expanded onto former farms. The diminished socioeconomic importance of agriculture in the province was mirrored in campus growth patterns, as new athletics fields, parking lots, and academic buildings displaced former farmland.

The second-growth forest on the far south of campus was cleared to make way for new agricultural facilities, with each discipline being allocated a “room in the forest.” A state-of-the art Dairy Barn opened in 1974 as the centre of the Department of Animal Science’s South Campus Teaching and Research complex (now the site of the Wesbrook Place neighbourhood) that also included beef cattle, sheep, swine, avian, wildlife, and aquaculture buildings. The field areas that are the current home of the UBC Farm were used by the departments of Plant Science, Botany, and Forest Sciences.

By the late 1990s, activity on south campus had declined significantly. The Forest Sciences nursery closed in 1991, and a new off-campus dairy facility at the Agriculture Canada research station in Agassiz, BC, opened in 2000. The new Dairy Education and Research Centre consolidated the herds of the Oyster River research farm and the South Campus Teaching and Research complex, and these old facilities were both de-commissioned. Avian research that formerly took place on south campus was also re-located to Agassiz, as part of the Avian Research Centre.

In 1999, students enrolled in the new Agroecology and Global Resource Systems programs “re-discovered” the south campus field areas. The students envisioned that the land could be re-created as an integrated farm system, which would provide a practical, experiential complement to the sustainability theory being taught in the classroom. The “Future Housing Reserve” designation established on this land in the 1997 Official Community Plan (this designation was subsequently removed by UBC’s new Land Use Plan) two years earlier suggested a conflicting vision that sparked a decade of discussion about the future uses of the land. 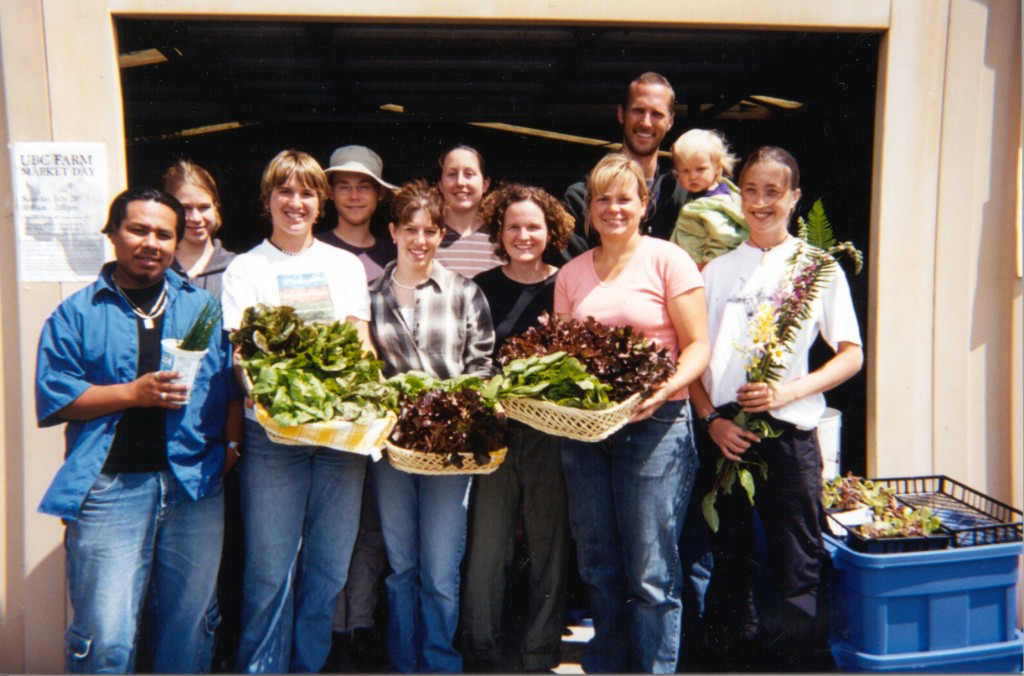 Student volunteers at the first UBC Farm Market in 2000

The Faculty of Agricultural Sciences published a vision document entitled “Reinventing the UBC Farm” in 2000 in partnership with the Faculties of Science and Forestry. This vision document was further elaborated upon in Derek Masselink’s Landscape Architecture thesis in 2001, entitled, “The UBC South Campus Farm: the elaboration of an alternative.” Faculty, staff, students, and community members worked together to transform these visions to reality, bringing previously fragmented field areas together into a single working farm and forest system that delivered a growing number of programs to students and researchers in many different disciplines.

From its humble beginnings starting with a small group of visionary students in 1999-2000, the UBC Farm added more programs, projects, activities, cultivated crops, gardens, fields, and students, researchers, and community groups at a sustained and rapid rate for a decade. With approximately 150 projects on site in 2011, the program growth continues to this day.

“Save the Farm” Campaign

Having been designated as a “Future Housing Reserve” in the 1997 Official Community Plan, the farm was faced with a considerable degree of uncertainty in its land security. Over the course of the decade that followed, the dramatic growth of UBC Farm academic programming and community partnerships rendered this designation obsolete. Nonetheless, a struggle ensued over opposing views on the future uses of the land. By the summer of 2008, there was great concern that the UBC Farm would be replaced by market housing.

Confronted by the prospect of a farm greatly reduced in size or moved to agriculturally nonviable soils, the Alma Mater Society club Friends of the UBC Farm (FotF) and other concerned community members initiated a “Save the Farm” campaign to ensure the 24-ha site’s land security and recognition as being key part of UBC’s sustainability aspirations. Through a well-publicized series of meetings, media releases, letter-writing campaigns, design workshops, and public demonstrations, FotF successfully mobilized support for the UBC Farm from students, faculty and staff, community members and organizations, and numerous levels of government. 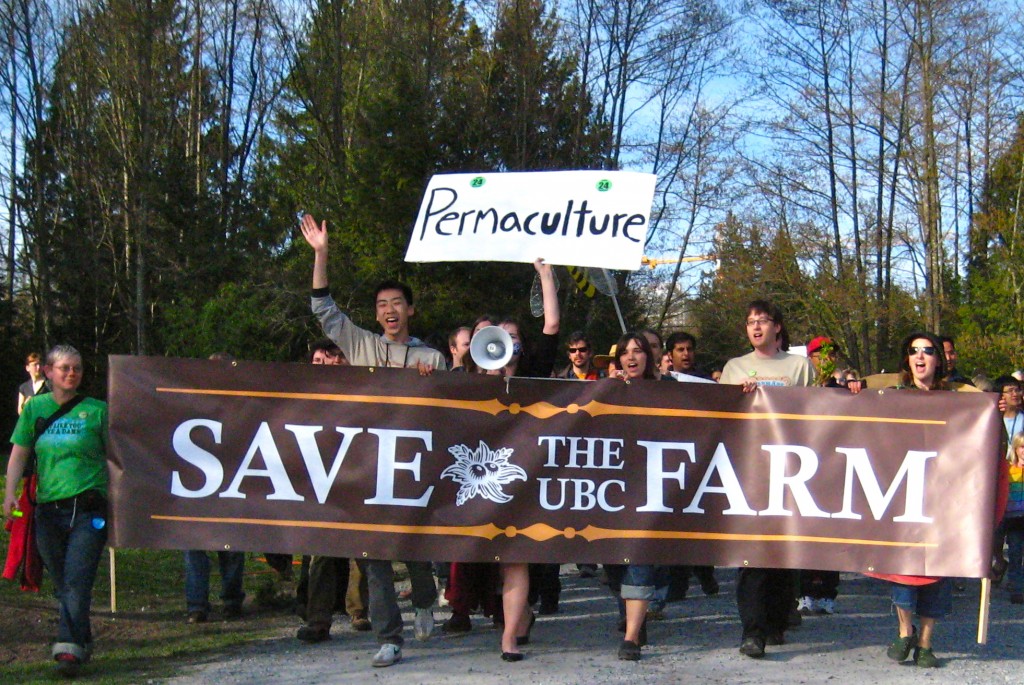 The Great Farm Trek on April 7, 2009, brought over 2,000 supporters to celebrate retaining the UBC Farm in its existing size and location

In response to the outpouring of support for the UBC Farm, the UBC Board of Governors issued a media release on December 1st, 2009 stating that there would be no market housing on the Farm provided that “the university’s housing, community development and endowment goals could be met through transferring density to other parts of campus.” The Board also called for the striking of a committee to develop an academic plan for South Campus to advance “academically rigorous and globally significant” teaching and research around issues of sustainability.

In the winter of 2009, Cultivating Place was presented to and warmly received by the UBC Board of Governors and Senate. Developed by numerous numerous stakeholders, including Friends of the Farm, this academic plan was to serve as a visionary plan and guiding document for applied sustainability on South Campus.

In 2011, following public consultation, the UBC Farm was re-zoned “Green Academic” in UBC’s Land Use Plan, and the Centre for Sustainable Food Systems was founded to pursue research with global reach. CSFS encompasses the UBC Farm, with a focus on research, teaching and learning that aims to understand and fundamentally transform local and global food systems towards a more sustainable, food secure future.