Alex Pomeroy first came to the UBC Farm as a practicum student in 2019, joining the field team in January 2020 as a field coordinator managing alliums, potatoes, cucurbits and legumes and spent one year with the chickens. He just left the Farm and Canada for London, where his partner is pursuing her Master’s in Music Psychology. In these dispatches, Alex is sharing his impressions on the agricultural landscape in the UK, as he moves from field work to pursuing policy and community work in food. 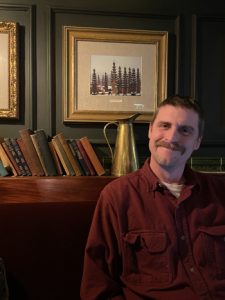 Alex Pomeroy at an English pub.

As it happens, the novelties have not entirely worn off. I presently sit inside Oxford Town Hall for the opening of the Oxford Real Farming Conference. Oxford, England – home to the oldest English speaking university in the world. Yesterday my partner Shelby and I took a “coach” two hours up the “motorway” from London – granted about 45 minutes of that was simply getting out of the city. We had initially planned for a shorter, more scenic ride on the train, but the RMT (Union of Rail, Maritime and Transport Workers) were on strike, one of a number of short periods of industrial action since the middle of December. The response from current Tory PM Rishi Sunak has ranged from attempts to undermine the power of the strikes, permitting employers to bring in scab workers, and most recently, proposing anti-strike legislation which would allow public agencies to sue unions and fire employees who refuse to work – a move deemed likely illegal by the general secretary of the RMT, Mick Lynch. Workers from multiple public services including postal workers, nurses and border control have been taking similar action, demanding fair compensation and improved working conditions. I stand in solidarity with public sector workers in the UK, as I begin to navigate the social and political contexts of my new home. I believe this period of unrest critically shines a light on the experiences of migrant farm-workers in Europe, facing exploitative “contract-in-origin” policies, tying them to a specific farm (not too dissimilar to Canada’s TFW program, allowing workers to change employers but requiring them to reapply for a work permit). Even worse, undocumented workers experience horrible working conditions and pay, all while living in constant fear of deportation. 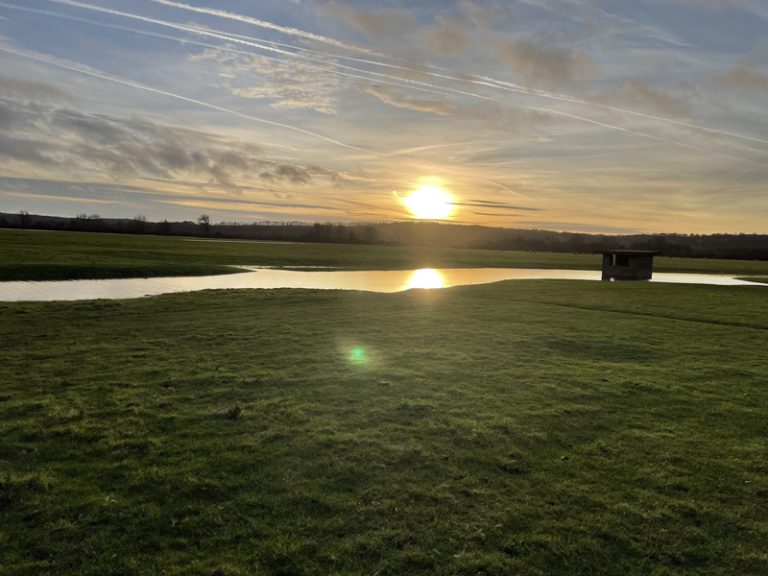 Wolvercote Common, Oxford. Grazing has been recorded here since at least 1086 – with many disputes regarding commoners’ rights over the centuries.

Anyways, back to the conference. I admittedly wake up in our hotel room with a bit of a headache, as we took in what the city had to offer last night, checking out some very old pubs and sampling local flavors. There was an incredible array of speakers (including Vandana Shiva) on topics ranging from gene editing (“GM’s with good PR” – Liz O’Neill / Director of GM Freeze), land struggles and agri-reform, the state of food policy in the UK, mass incarceration and prison abolition, and the plight of migrant workers in Europe. Speakers from a group called Cradle Community and the Landworkers Alliance spoke on those last two topics and I felt particularly fired up upon leaving the sessions. I was shocked to learn that there is a genetic technology bill currently going through Parliament, which if passed, would deem an organism not GM (including animals) if a gene edit made in a lab “could” have occurred in nature. Gene editing claims to be more targeted and precise, but as Liz O’Neill reminded us, it is crucial to recognize that precision does not equate to accuracy. One of the main takeaways from this panel including Dr. Shiva, was that contrary to the claims made by big agribusiness, we do have an abundance of food. The problem is with unequal access, and the fact that so much of what is produced is commodified for animal feed and biofuel (eg. soy and corn). One proposal put forth by The Land Magazine in their 2023 manifesto, to address the high costs and difficulties of obtaining organic certification, would put the burden of labeling on “farmers who employ chemicals or other ecologically suspect practices” rather than on small-scale organic growers. While this does not seem likely or feasible, it sure is a nice thought. I met some fascinating folks and the experience has begun to help me narrow down the type of work I want to find here in the UK, as well as fields of postgraduate studies I wish to pursue. Lastly, I want to thank Dakota Varen for recommending that I check out this conference!