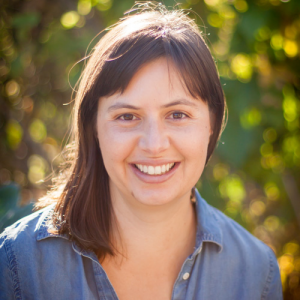 How did you get into this field of research?

I see agriculture and the food system as one of the ways that people have a large influence on the environment. I hope that my work has an impact on the environment in a positive way and it helps build towards a more sustainable farming system, contributing to human health.

What is the motivation behind the BC Seed Trials?

People are becoming aware of where their food comes from but farmers often don’t know where their seeds come from, in terms of how they are bred and produced. In my previous research and here in BC, I have found that diversified vegetable growers are concerned about losing access to seeds that are important to them, so they want to find ways to secure their access to those varieties or have more of a say in the way the seed industry works. In the case of organic farmers, since they are a smaller portion of the market, a great deal of the plant breeding conducted and seeds offered in catalogues aren’t focused on their markets and cropping systems. Both organic and conventional farms may have difficulty finding varieties that work in their region, particularly when we are talking about all of the vegetable crops that are grown in BC. For instance, having a tomato that works well in BC is not the same as having a tomato that works well in the Central Valley of California.

The BC Seed Trials identify varieties that will encourage a local seed market. In the Pacific Northwest and BC, we have an ideal climate for growing certain types of seed crops like brassicas (such as kale), spinach and beets, so we are looking first at these seed crops where we have climatic advantage for production. Within those crops, the seed trials will identify varieties that are desired by local farmers. There is a need for farmers to grow seed on a scale where they can really supply what commercial growers need in our area. This activity supports regional seed systems that makes locally selected seed crops available on a larger scale, which allows better access to varieties that work well for this region.

What are the BC Seed Trials?

The BC Seed Trials project involves farmers who grow seed crops in BC and commercial vegetable growers who do not produce seed. We grow a selection of varieties in each crop, from 12 to 30 varieties depending on the crop, and evaluate them based on a range of traits that are important to farmers in BC. Farmers are always concerned with yield, but for direct market growers, appearance and flavour are also very important. Several of our crops also have the potential for season extension, so we look at how well they hold up in storage or in the field in the fall and winter. Our trial sites include the UBC Farm and about 20 participating farms on the Lower Mainland, Vancouver Island, and as far away as Prince George and the Okanagan. This gives us a chance to see the varieties across a wide range of environments and cropping practices, and involve a really great group of farmers in evaluating the varieties and determining what is really needed for a resilient seed system in BC.

Do you find certain varieties do better in different places?

I haven’t finished looking at all of the data yet, but so far we tended to have more consensus among growers about best-performing varieties that I expected given the range of growing conditions. One interesting point of comparison has been between standard commercial varieties and varieties that are from locally grown seeds. In each crop, we have a handful of varieties from independent farmer/plant breeders and public plant breeding programs in BC and the Pacific Northwest that are specifically bred for organic production in this region. We have seen some of these varieties do very well here, and there is a strong potential to continue to improve them.

There is one difference between hybrids and open pollinated varieties. Hybrids are very uniform because every seed is the result of the same cross between two parent lines. But an open pollinated variety has much more genetic variation, and there is potential for the variety to change and become better adapted to a local environment over time. The farmer keeps saving the seed and every time, they always save the best plants. Without even putting much formal thought into it, they are placing a selective pressure on the plant and selecting the plants that grow the best in their environment. That will eventually shift that variety to doing better in that place, and this will happen even faster if done intentionally and using principles of plant breeding. The opportunity to possess varieties that are adapted to the region is part of the importance of having local seed production.

Why are seeds important?

I think of the seed as the package that carries both the genetic material and the science, culture, and history that went into creating that variety. All the qualities that we desire in the varieties that we grow originate in the seed. There are a lot of reasons why the genetic material behind our crops is important, but one is biodiversity. It’s important to have a diverse array of not just the crops that we are growing but also the varieties within those crops. The more agrobiodiversity that we have in our farms and landscapes, the less likely we are to have the problems from monoculture like higher susceptibility to disease. Having a reserve of genetic material behind our crops is an important way to adapt our crops to climate change.

The nature of climate change is such that there is a lot of uncertainty about what sorts of traits will be important in the future. We need to have diverse genetics that are available to farmers and plant breeders for crossing and creating new varieties.

What’s your solution to curbing the loss in biodiversity in agriculture?

One solution is for people to look for different kinds of varieties. Consumers can open up their kitchen and table to a wider array of varieties. This would require accepting something that looks a little different, or being interested in vegetables that are unfamiliar. A positive change is with heirloom tomatoes and apples. This is an example of people going from expecting everyone to have same tomato to having more and more variety. Sometimes, this variety is more expensive so there is an issue around getting the diversity seen in high end restaurants and the gourmet side of the food system into the supermarket on a large scale. Right now, supermarkets want vegetables that are more uniform. Changing the way that we eat and changing the way that the food system is structured so it can handle diverse crops is an important step.

What is your Favourite thing to do at the UBC Farm?

I live near the UBC Farm, so one of the great things is that I can go to the Farm really early in the morning before a lot of people get there; I did that a lot during the summer to check on my trials, and it’s a total escape from the rest of the campus area, walking by the flower fields, watching hummingbird battles – there is so much life in there.